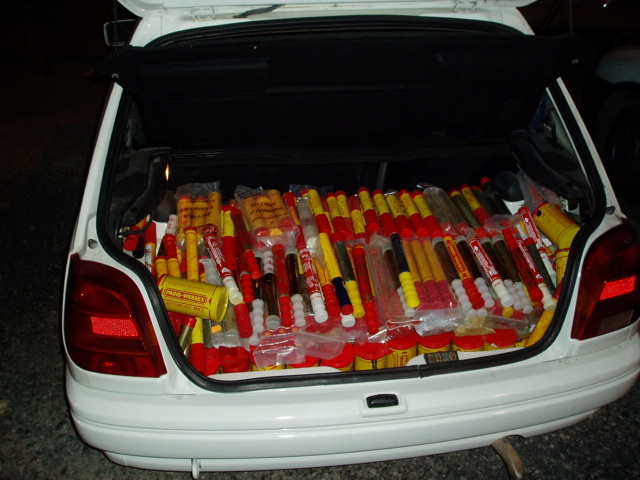 Will u please tell us something about yourself ?

I am 27 years of age. Live in the central of Stockholm and have a good job. My interest in fotball has always been there, since the very first steps I took. Regarding the violence I have been involved since the early nineties. At first mainly at the other big sport in Sweden, icehockey, and later more and more football related. Always with my team, Djurgården, never fought together with any other teams supporters. These days I am part of the "organization" that controls things in my teams firm, DFG (translated in English as "Djurgårdens Fine Lads") and the last season was a good one in our perspective.

Speak about your crew, and the others djurgården supporters (story,numbers, relations with other hooligans, enemies,...)

Djurgården was really the first club in Sweden to take after English teams as for having a "firm". Our first firm was called "the iron gang" and consisted of approximately 40-50 lads who had grown tired of being chased around by our big local rival team, AIK and their supporters (they did not really have a firm at this point, but more an upperhand regarding violent supporters). Fairly soon, some boys (17-19) years old, like myself, started a youth firm, called "the baby firm". We grew to approximately 30-40 lads rapidly, and this gave Djurgården the countrys first numerous firm when we were together. In -93 to -95 we definitely grew to become to leading crew in Sweden. At this time, AIK had also gathered themselves under a name, "Firmanboys", but they did not have the numbers to match us on a normal day. The third team in Stockholm, Hammarby, has never really had a firm in the proper sense of the word. Everybody are aware of the fact that they on a good day, when they can gather their scattered supporter crews, have one of the best crews in the country. They just have never been organized in the same way as first Djurgården, and later AIK.Our two firms, the "iron gang" and "baby firm", were put together via name and more via crew in -95. We switched name to DFG (the current name) and could muster a good firm of 100-120 on derby days. We went to Gothenburg to face IFG Göteborgs crew with 9 mini-vans this season, and caused good mayhemin quite a few occasions. The top ones being the mentioned Gothenburg trip when we smashed their firm back into a pub, and later when we faced a decading AIK firm, they could only get 20-30 people together for a derby, and we met them with 100. Not a good day for them. Presently, we have been enjoying perhaps the best season ever, with a huge ruck in the Vasa park against "Firman boys" (AIK) as top memory. 100+ of us against 70+ of them gave a hell of a ruck, where we turned them over completely finally and sent 12 of their boys to the hospital. Apart from us DFG, we have a lively supporter movement, perhaps the most vital in Sweden right now, with many supporters travelling to away games as well. There is a section in our stadium called section F, which has named the other big supporter group. But this is more a losely coupled crew of old DIF supporters and some old hooligans. Great gang that helps to keep the atmosphere up in the matches. They are however officially against all kinds of violence, although I know many of them would back us up any day! We do not have any official, or unofficial relationships with other crews orsupporter gangs in Sweden. Biggest enemies. AIK, IFK Gothenburg, Hammarby. These are really the only ones that matter, although some other teams can put together a firm occasionally (Västerås, Helsingborg, GAIS).

Could u speak about the Hooligan Movement in Sweden ? (Other firms; Top boys; did the hooligans use weapons ? clothes ?...)

The hooligan movement is fairly strong, given the fact that there is only really 4 teams with firms, although the police do their best to ruin things. Number and position in Sweden, according to my completely unbiased opinion..

1. DFG - have had some weak years, but last year we came back in big style. The only real fight in sweden with almost 200 hooligans involved took place in Stockholm against our major rivals "Firman Boys". The fight lasted several minutes and I dare say we gave them a good leason this day. We have betweeen 70-120 people on all derbys (mostly around 100+) with perhaps 30 people being 20-25 years old, 50 people 25-30 and another 20-30 or so being 30 years old and upwards. This gives us a good foundation to stand on. Some would say we are the most weapon friendly in Sweden, given the fact that we have used weapons a few times. I would like to say we are no better, nor worse than any other firm. We definitely have the crew with most lads being involved for the longest time.

2. Wise Men (IFK Gothenburg) - A strong firm of perhaps 50-70 in their real crew, with 30 or so hangaround. Also "good" ages - and some mentals in their crew. Like to use weapons and definitely like to throw things around... They are the ones we would most like to put in place the season to come.

3. Firman boy (AIK) - Get a lot of publicity since they have a few nuts who like to write nasty letters to referees and send bombs (!) to their teams, AIK, Head of Security (they did that a few years ago). Have also had some good results against us last few years, but all of these were at hockey games, where we simply cant get a decent firm together any longer.. Nowadays they carry between 60-80 in numbers, with a slighly lower age than the previously two mentioned. They are no doubt a good firm. Little respect for police in their crew.

4. Hammarbys crew - Could be placed as nr1. on a good day. Even yet, they are ranked here according to me, since they are just not organized enough, and very difficult to rely on showing up with a decent firm derby days. Many derbys they do not show up at all with a ready to go firm. Have perhaps as many as 70 when they gather their forces, and this is indeed a good firm. Many of their boys are older, and have heavy criminal backgrounds, but these lads are not so involved any longer.

What is the political situation in the swedish tribunes ?

Not so political at all. Not right or left as in Italy for instance. Politics are never brought to the table when we gather our firm, and it is the same for the other crews I think.

Is there a strong repression (police, justice...) against hooligans in Sweden ?

Yes, there is a special unit called "the supporter police" who work full time on this. They are perhaps 15 people al together, which must be said to be a lot given the small country we are. They have locked up quite a few people the last years.

What is your best fight in memory ?

Definitely the one in the the Vasa park against AIK last year. Never been such a fight in Sweden before. It looked completely bizarre, and witnesses told the press and police afterwards that it looked like a war zone. Running battles for a few minutes with DFG all the time on top. After that the AIK lads could not stand any longer but had to rush off, leaving two lads lying on the ground in a poor shape and 10 more had to visit the hospital.Massive!

What do you think about other european hooligans ? (english, deutch, belgians, germans, french, polish, ...)

Seems like the movement is strong in England, with Stoke, Cardiff, Millwall up in front. But don't really keep myself up to date with other countries. Polish seems messy to front in their own country, and the Turks I DONT like! Went to Copenhagen last year together with 30 DFG to see Arsenal - Galatassary, a good 70 miles for us to travel. We fought some turks that day, but they had large numbers out... Germany, Holland, Italy, France and Belgium all have some good firms I think. Would be nice to measure strength with a team from one of these countries in Europe this year!

Never look back. Always back up. No surrender.
UN99
Toppen
Svar
6 innlegg • Side 1 av 1

Maxthon style by Culprit. Updated for phpBB3.2 by Ian Bradley